From an adolescent to a teenager, I would watch shows like Sabrina the Teenage Witch, The Craft, to watching Charmed (the original one), and others. It’s the magic for me, I guess. And how a person can make something happen with incantations, a combination of ingredients for spells, and the ability of believing and using your energy and such. Though not only that, the fact of what one can do with magic. Then there come movies like with the supernatural/paranormal and fantasy elements to it.

Though, as from what you may have picked up from my previous posts, I believe in that magic just how it is portrayed on television.

Those are the magic I started out believing in until I gotten older. I believe in that type of magic even more, but also a different type of magic than when I did as a child and teenager. I don’t know when I first felt magic, I know that magic has always been inside me.

It’s the magic that makes you feel like you can accomplish anything. That feeling inside you that is so powerful and believing you can thrive and being one with the Universe. Okay, I’m getting mystical. 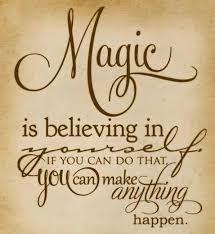 Magic can be looked at differently to many people. Though, I also see it as something that is nothing short of a miracle; like for instance, a woman giving birth. Something wonderful happened in someone’s life that they have been waiting for, and someone having their life being spared, etc. Well, it’s like magic in a way to me. I believe anyone should a little magic in their life because mostly are magic.

Still, with magic, it requires doing the inner work in ourselves and believe that whatever we want to achieve we have to believe it will manifest. It’s the meditations and the mantras to change your life for the better. It’s the little things as well as the big, but the little things mean so much more. It’s feeling a white light enveloping you, warming your soul, and relaxing your mind.

Believe in the magic in you. Believe in the power you have inside you. For you can do whatever it is you set your heart out to do.

Do you believe in magic? How do you view it?

13 thoughts on “March Writing Challenge- Day 3: Do You Believe In Magic?”